Ms. Wheelchair Ohio was established in 1972, in Columbus Ohio by Dr. Philip Wood.
In 1974, the first Ms. Wheelchair America event was developed.
Since then this non profit program brought together the most enthusiastic women in wheelchairs
to promote awareness and break barriers that many of America's disabled face.

or go to the
Ms Ohio Wheelchair Facebook
to register for the 2016 Pageant
https://www.facebook.com/MsWheelchairOhioAmerica

Congrats to all of the ladies who participate with the 2015 event!!

Crowned on February 22, 2014 - at the Roberts Center in Wilmington Ohio

Elizabeth was born March 7, 1992. She was born with a condition called Cerebral Palsy and has been a wheelchair all her life.
Even though her younger sister is able-bodied she was always told they could both do the same things.
She was also taught to never give up, and she never has and never will!

When applying for Ms. Wheelchair Ohio, Beth described herself as Determined, Compassionate, Intelligent, Funny, and Trustworthy.

She will use all of these strengths to show people with disabilities
as well as those who don't understand disability that your only barrier stopping you is the one you refuse to face. 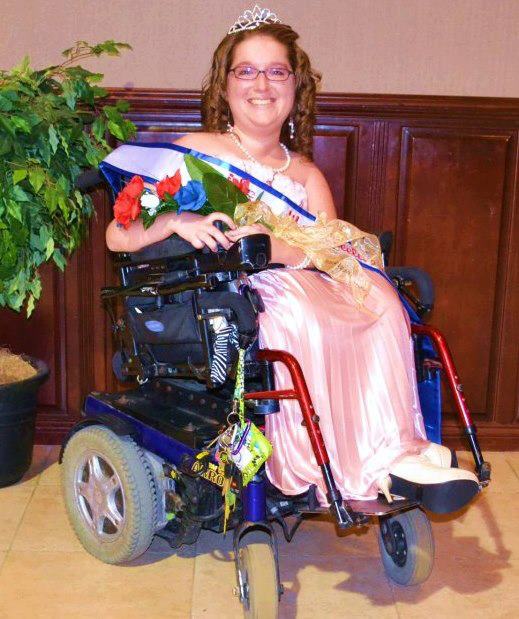 Jessica is a senior at Wright State University in Dayton Ohio.

Jessica's facebook link is below - please help us congratulate her for her achievement! 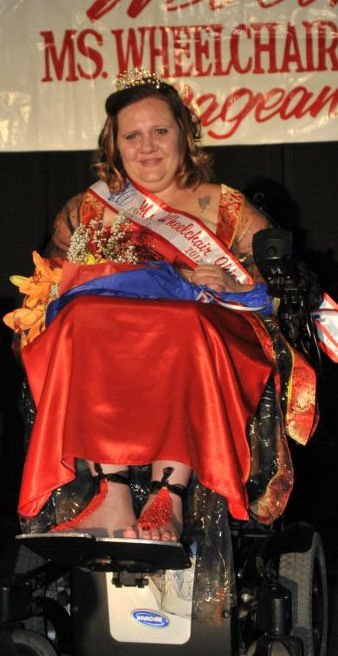 Crowned on March 17, 2012 - at the Roberts Center in Wilmington Ohio

Angela is from Wooster Ohio and has attended Wright State University.

Angela's facebook link is below - please help us congratulate her for her achievement! 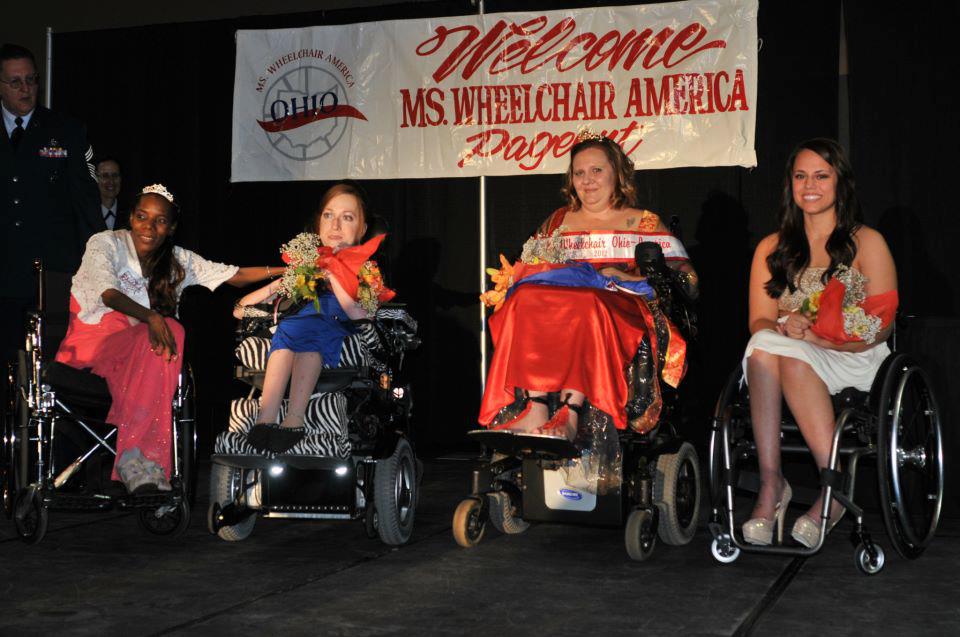 (These photos were from Angela's facebook page as she shares her story with our community.)

Any interest in assisting the 2013 Ms Wheelchair Ohio Pageant, please contact the coordinator Melissa Milinovich at the facebook link

The 2009 Ms. Wheelchair Ohio Pageant,  a part of the Ms. Wheelchair America program was held
March 26-27, 2009
at the DoubleTree Hotel in Columbus Ohio. 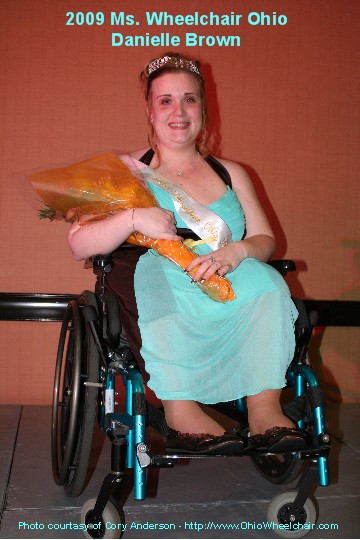 Danielle Brown is a 25 year old  from Danville Ohio who strives to make people more aware of disability issues and to see people first before their disability.  She is the treasurer of the Kiwanis Club where an adaptive group helps promote accessibility awareness.

Danielle recently graduated from the Knox County Career Center where she studied Computer Office Technology.  She hopes to attain a secretarial position with a goal of independent living.

As she was crowned the 2009 Ms Wheelchair Ohio, Danielle reflects on her experiences with this event and has expressed how much she has learned and grown from the other contestants.  Her experience with Shari Cooper (Ms Wheelchair Ohio 2008) was very informative as Danielle will fill those big shoes left from Shari's 2008 term.

Best wishes to Danielle and all of the 2009 candidates in their efforts to promote awareness and visibility to our communities.

Below are the scenes from the 2009 MS WHEELCHAIR OHIO pageant.

My reign as Ms. Wheelchair Ohio 2008 was an extraordinary experience!  I got the chance to travel the great State of Ohio and speak on my platform “A Positive Self-Image” for People with disabilities.  From the moment I won the title as MWO 08; Ohio really supported me significantly.  I did several TV interviews and had numerous articles written on my reign.  At the national Ms. Wheelchair America Pageant I was chosen to receive the Nicki Ard Achievement Award along with $500.  Along my journey I met many strong advocates and everyday people fighting for positive change in the disability community.  Overall my year was one that I will never forget.  Always remember “To have the Faith and everything “Will Fall Into Place”!

Congratulations to the 2009 pageant participants
and Thanks to all who helped and supported the 2009 Ms Wheelchair Ohio.

The 2008 Ms. Wheelchair Ohio Pageant,  a part of the Ms. Wheelchair America program was held
April 11 - 12, 2008
at Recreation Unlimited in Delaware, Ohio, which is about 20 miles north of Columbus. 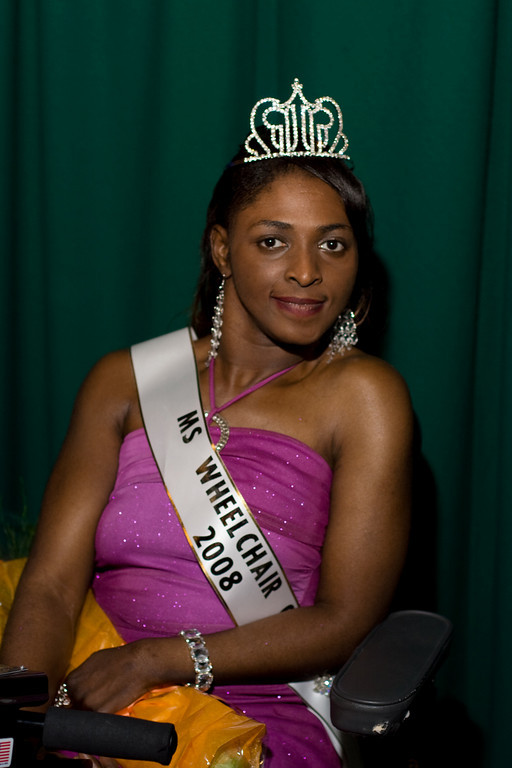 2008 Ms Wheelchair Ohio
Shari Cooper is 35 and lives in Dayton Ohio.  Her long list of achievements include Disability Hall of Fame Award, Goodwill Industries Achiever of the Year, and an Associate of Applied Sciences degree in Disabilities Intervention Services.  While not serving on the Consumer Advisory Commission Service, Board of Dayton Advocates, Ohio Developmental Disabilities Council, and as Secretary of the Ohio Developmental Disabilities Council, she enjoys shopping and spending time with her four brothers and sisters.  Shari will go on to the 2008 Ms. Wheelchair America pageant hosted in Rockville Maryland July 21-27, 2008. This national event is never easy, for the competition Shari will face is very competitive, but she is ready for the challenge and represent Ohio like a champ.

2008 contestants from right to left are:

All of these ladies were awesome candidates and very promising individuals.  There were no last place positions. Everyone who participated had a very dynamic personality and were already ambassadors to disability awareness.  Best wishes to everyone who supported this event and continues to educate and enhance others that live their lives on wheels.

A full story of the
2008 Ms Wheelchair Ohio pageant
is now here - click the link below! 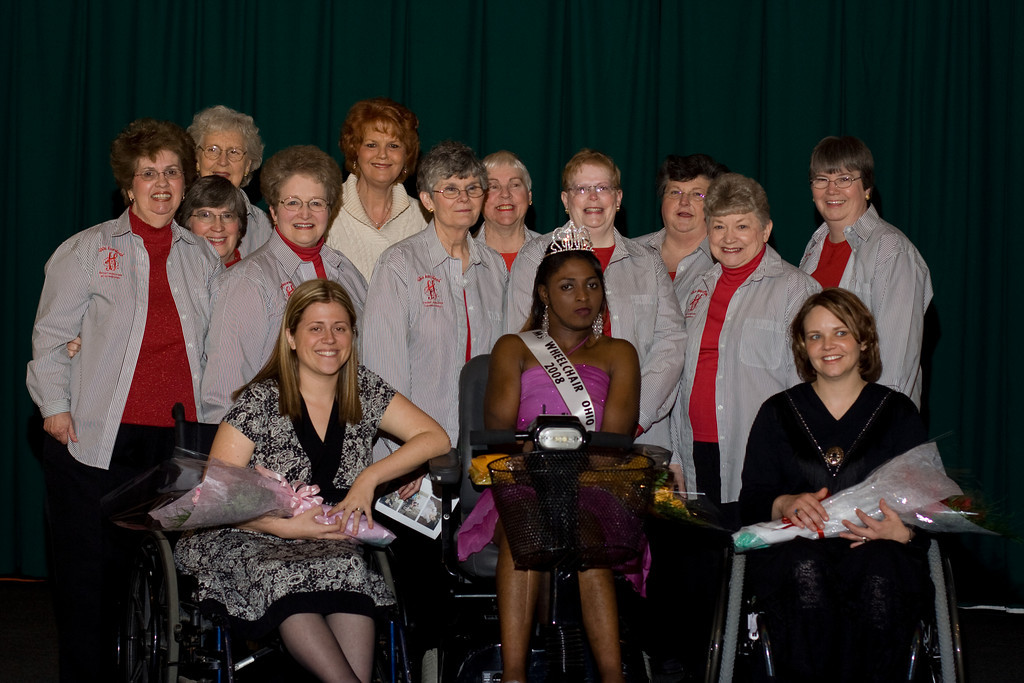 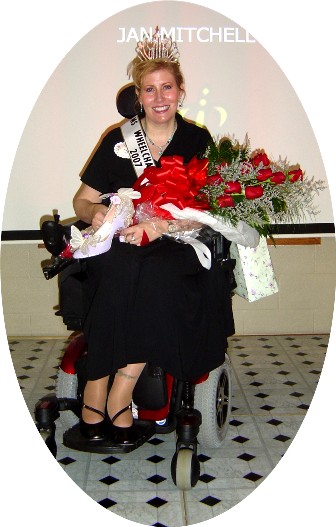 Janni (Jan) Mitchell, a 41 year old from Canton, believes that our obstacles and problems shape us for our ultimate destiny.  Her lifes ambition is to bring understanding to the word disability with an emphasis to the word "ability".  She advocates on the Ohio Governors Council for People with Disabilities and has received recognition from the Internal Association of Assistance Dog Partners.  America Online featured her in 2004 in honor of her work for the disabled and with service dogs. 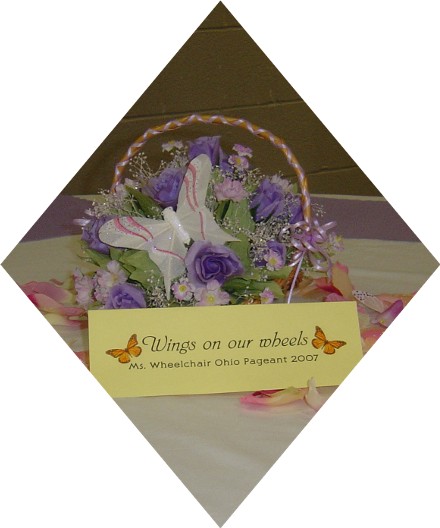 Congratulations to everyone who participated with the Ms. Wheelchair Ohio pageant and has devoted their lives to help expand knowledge throughout the Ohio community of those who depend on wheels.

Carol Tolsen,  Ms. Ohio Wheelchair coordinator, states that this pageant is in no way a beauty contest, but a competition to select the most accomplished and articulated spokesperson for the millions of Americans with disabilities.  The selected representative must be able to communicate both the needs and the accomplishments of her constituency to the general public, the business community and the legislature.

Ms. Wheelchair Ohio was established in 1972, in Columbus Ohio by Dr. Philip Wood.
In 1974, the first Ms. Wheelchair America event was developed.
Since then this non profit program brought together the most enthusiastic women in wheelchairs
to promote awareness and break barriers that many of America's disabled face.

You can find out more about Ms. Wheelchair America by reviewing the link below.